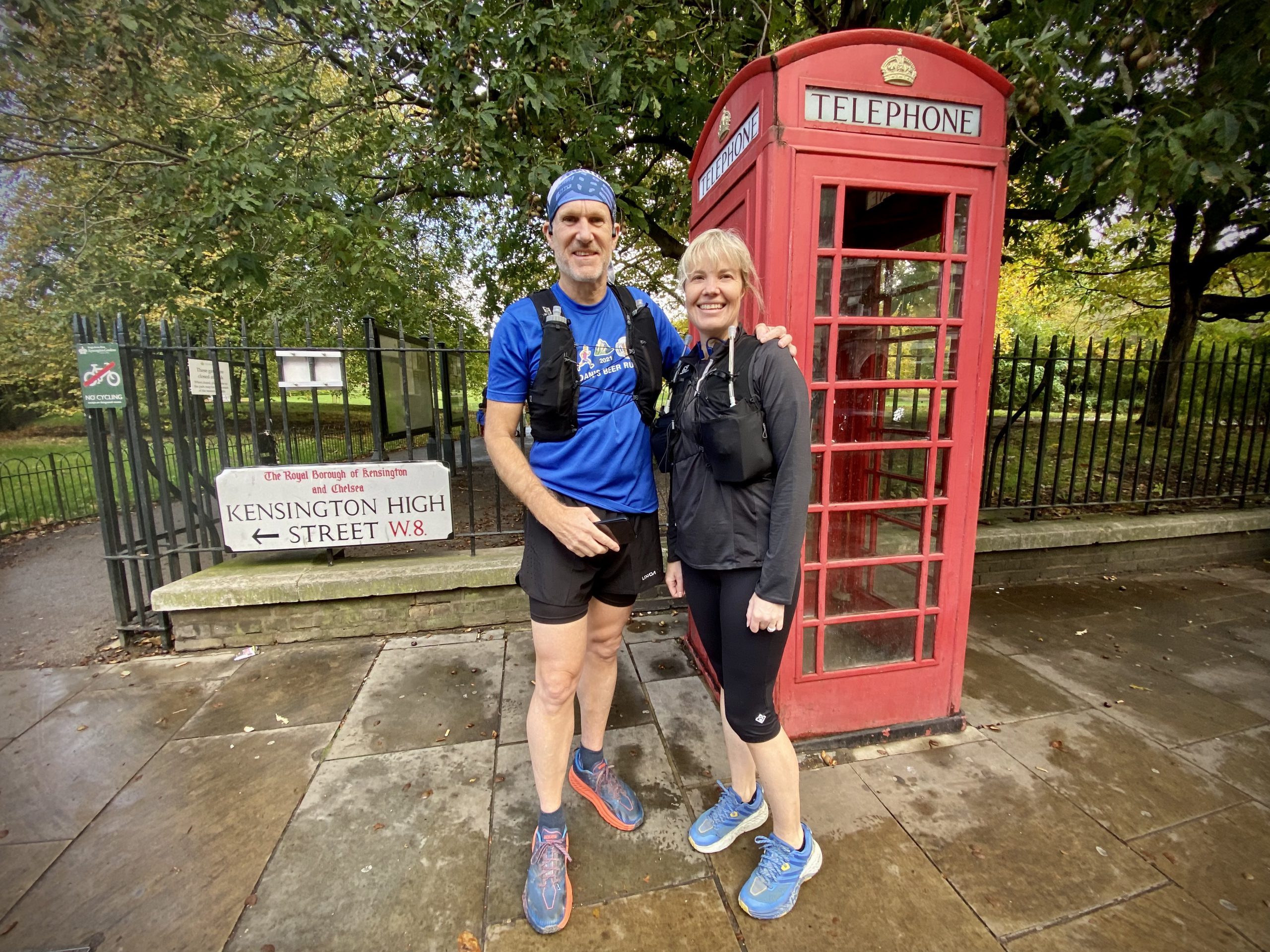 October ended up being quite a busy month and we just couldn’t see ourselves making a getaway for the run so we decided to go for a London adventure. It’s great to have this city so close by with its iconic landmarks and sights.

As usual, I got out the trusty OS Maps app and just started plotting. With a few definites to fit in – one of the parks, Buckingham Palace, The Mall, Trafalgar Square, Tower Bridge, Westminster – the route more or less took care of itself. We discovered a quirky boutique hotel (Hux Hotel) for the overnight stay. The location on Kensington High Street made Hyde Park the perfect start/finish location.

The weather promised to be pretty lousy with heavy rain and blustery winds predicted. We’d been out the morning before in just such conditions so we took all of the appropriate gear. The morning of the run started out just as expected. We’d aimed to begin a bit later than usual to be sure the caffe’s and pubs along the way would be open. What a touch this turned out to be – as we set out the sky cleared and we had glorious sunshine the whole way. It’s a bit baffling that we have not had a single wet run this whole year (of the 12 in 12 that is).

Our route took us around the North side of Hyde Park, though Mayfair and Green Park and up the Mall to Trafalgar Square. This was the first three miles or so and took us to our coffee stop at the foot of Nelson’s Column. Most the the route was very familiar but it was a great new perspective to be running it. Cally & I both had big grins on our faces and were just loving it.

We hit the North Bank at Embankment Station and hugged it all the way to St Paul’s and the Millennium footbridge. Next stop was Tower Hill where we had our first pint at the “Liberty Bounds” pub overlooking the Tower of London. This was about half way and the perfect time to take a moment.

Crossing over Tower Bridge things started to get a bit congested and we found ourselves dodging pedestrians all the way along the South Bank to the London Eye. On one hand it was to great to see people out and about again with things feeling more ‘normal’. On the other hand it made the running a bit tricky. We took another stop at a pop-up bar near Shell House and The Eye – why not?

It was back in May on our run to London when we stumbled upon the COVID Memorial wall. What a great idea – thousands of hearts had been painted onto the embankment wall and people had written messages and memories of loved ones who had been taken by COVID. It was very poignant and I’d planned to return with a pen and remember my Mother here. She loved her time living in London and I think she’d approve of having a mark in her name overlooking Westminster and the Thames.

After crossing Westminster Bridge we were in the home stretch following the route of the London Marathon along St James’ Park to Buckingham Palace, back up to Hyde Park where we followed the Southern border to the start point and the perfectly placed Goat pub adjacent to our hotel – perfect planning 🙂

This was always going to be a slow pootle. Some of the runs have been more challenging than others but this one was always going to be about soaking up the London sights and that’s exactly what we did. Cally had also been nursing a foot injury and so has lost a few training miles. We also did not want to aggravate the injury which, thankfully, gave no drama.

Amazing to think that we are now into November already! Clocks have changed at least we have some more light in the mornings. If all goes well next month will see us taking in a trail run in Boulder, Colorado – very excited about that one but don’t want to jinx it – still awaiting official confirmation to be able to fly to the USA.