Although I was not born in CT, I still consider myself a Capetonian. If you ever live here for a bit you would understand why and do the same. It’s a special place. This trip was initiated after we discovered that my 84 year old father had a large brain tumour and needed an op.

So, the children rallied and I found myself in Cape Town, after a four year absence, with my two brothers spending time with my dad. Thankfully the operation was a roaring success and after the initial pre-op week fraught with worry I was able to relax a bit and enjoy the city and time with old friends.

It’s impossible to overstate the beauty and aura which the mountain projects. It is omnipresent as both a beacon and magnet. I could not wait to hit the trails and re-discover its secrets. Wow. Did it ever deliver.

I was staying with my brother in the southern suburb of Claremont nestled on the Eastern side of Table Mountain. The lower slopes are about a mile from the front door. It was going to be epic.

The month-long February trip saw me in the early phase of a training plan for the April Manchester marathon leading up to the June 100 mile South Downs Way run. I wanted to use the time to get some hill training in but mainly explore the mountain. I combined some regular weekday shorter forest loops with longer weekend adventures.

The best way I can think of to describe it is just to show the pics. The obvious beauty of the place is far better expressed in images than any words I could come up with…

Rondebosch Common – not a bad spot for a Parkrun!

This week culminated in a run up Newlands Ravine, around Devils Peak and back past the blockhouse and Newlands forest. Despite all the years living here I’d never been this way. It was everything I’d hoped for with clear skies and stunning views initially over the southern suburbs then the city bowl and Table Mountain.

Heading up Newlands Ravine – the ‘V’ in the middle

Looking back near the top over the Southern suburbs

Over the Devils Peak saddle looking towards the city. Lions Peak ahead

The Block House on Devils Peak

Rondebosch Common – not a bad spot for a Parkrun!

This was the big one. I knew I wanted to go up Platteklip Gorge at some point. This route runs up the ‘crack’ in the face of Table Mountain and is steep with loads of switchbacks.

I made a super-early start and caught the sunrise at the blockhouse on the slopes of Devils Peak. It was 07:30 by the time I reached the start of the Platteklip ascent and the route was already crowded with walker and runners.

While I was mostly passing, there were a good few trail runners who left me for dust. I’d love to spend more time on the slopes here – the conditioning must be fantastic with all the ‘vert’ available. Still, the Strava segment took 48min which was probably about an hour quicker than the previous time I’d been up in 1988 (yes 1988!!).

The views were stunning and the run culminated in a very hot downhill via Constantia Neck, Kirstenbosch and Newlands forest. Wow. 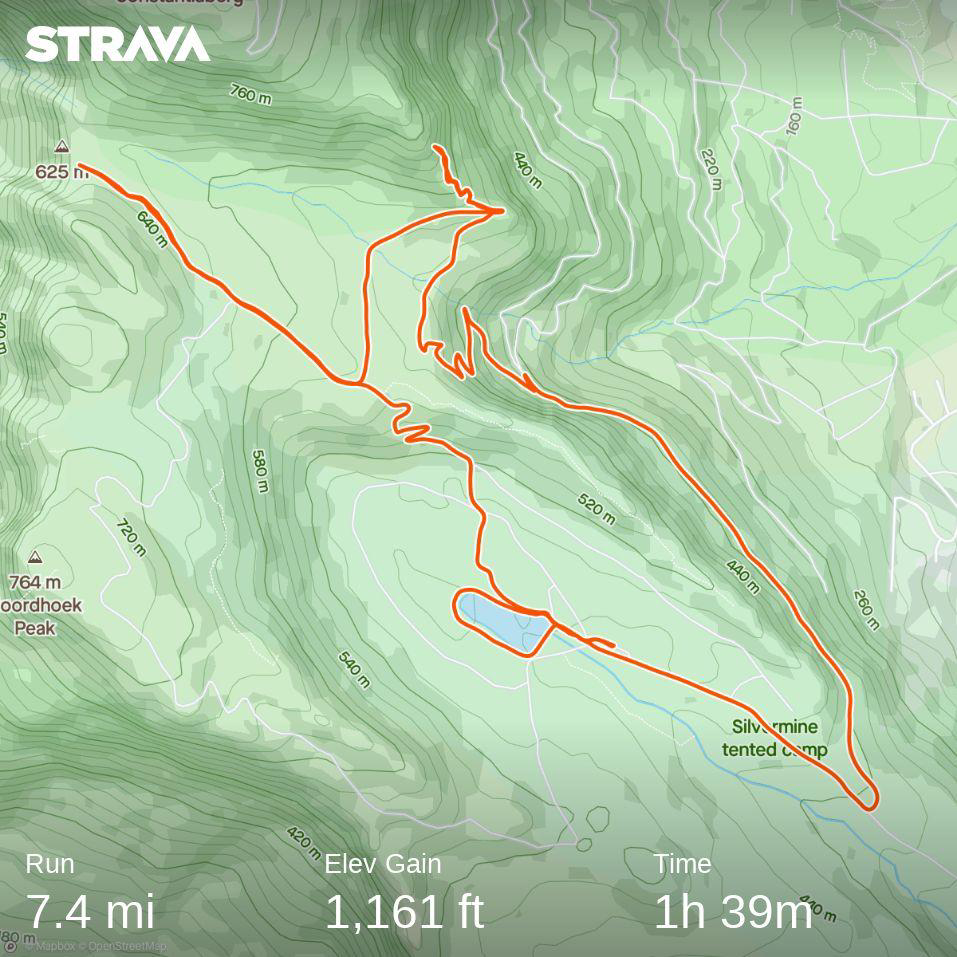 On the Sunday of week 3 I got to run with Graham, a very old friend from school, who is a local with fantastic knowledge and experience of running Cape Town’s trails.

It was a real pleasure to get up onto SIlvermine, see the Hout Bay lookout and explore the elephant eye cave. It was an absolute treat.

And then there was this little sunset jaunt with Patrick and Ryan. A clear mild evening with no wind, scrambling through the fynbos and opening up mind blowing panoramic views across all side of the Cape peninsula. Wow.